Pasta and Politics: GPAD Thanks YOU for an Inspiring, Successful Fall Fundraiser! 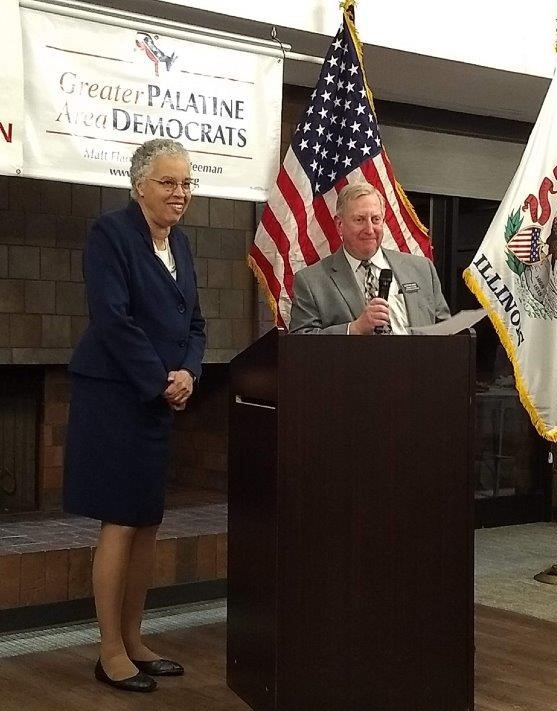 We elected more local Democratic officials last year, and they came to GPAD's fundraiser last week to talk about how they are making government better! But before we get into that: THANK YOU! to all the supporters, volunteers, elected officials and candidates who came out last Thursday to hear U.S. Rep. Sean Casten and Cook County Board President Toni Preckwinkle at Greater Palatine Area Democrats' Fall Fundraiser at Arlington Lakes Golf Club in Arlington Heights. THANK YOU! to all the donors who gave generously to support both GPAD and Wheeling Township Democrats. Photo: left, the Hon. Toni Preckwinkle and the Hon. Matt Flamm at the Oct. 10 Fall Fundraiser.

And THANK YOU! to Wheeling Township Democrats for helping GPAD run the event! The Fall Fundraiser, along with the Botterman Breakfast in the spring, keeps the doors open at the only year-round Democratic office in the Northwest Suburbs.

Our Democratic Electeds talked about how they are making a difference for the better! U.S. Rep. Sean Casten, who was one of the first to support impeachment of President Trump, spoke about that process. Casten also addressed his initiatives for the environment, which is his signature issue. Keynote speaker Toni Preckwinkle, Cook County Board President, reported on the progress that Cook County State's Attorney Kim Foxx is making towards improving the justice system by helping young people who make minor mistakes make amends but also avoid a downward spiral in their lives.

Illinois is leading the nation in its tough-but-fair cannabis legislation, according to the Democrats our area sent to Springfield: Illinois State Sen. Ann Gillespie, 27th District, State Rep. Jonathan Carroll, 57th District and State Rep. Mark Walker, 53rd District. Gillespie also described how freshmen State Senators who had campaigned on reproductive health care used their collective power to reactivate that legislation--and get it passed! Carroll, who is in his second term, explained how Illinois is leading the country in legislation on food allergies, thanks to his legislation to regulate sesame, one of the top ten of food allergens. And Walker related the successful efforts of Gov. J.B. Pritzker to work towards restoring bipartisanship to the Legislature.

Cook County Board Commissioners Scott Britton and Kevin Morrison, elected last fall to the County Board, have spent the last year introducing themselves to local officials in their districts and explaining to them how county programs can benefit their towns. For many of these local officials, it is the first time a county board member has ever visited, let alone offered county help to their community, Britton and Morrison said.

The 2020 primary is half a year away, and that means that local offices--from judgeships to flipping the 54th House seat-- are up for election on March 17. One of the highlights of the night was hearing the inspiring stories of the many candidates who are running for elected office.

Finally, a personal "Thank You" to Greater Palatine Area Democrats from me, Maria Galo, for awarding me the newly-named Barack Obama Community Organizing Award. I am humbled and grateful for the opportunity to volunteer with all of you. We have a lot of work to do in the coming year. I'm proud and glad to be part of GPAD at this time in our country's history.